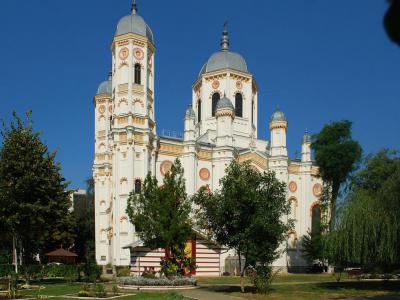 The New Saint Spyridon Church is a Romanian Orthodox church in Bucharest, located at 29 Calea Şerban Vodă. Originally built with considerable Gothic influence, the building (especially the towers) was strongly modified later on by Patriarch Justinian.

In 1768, another church was built on the site. It was erected for Scarlat Ghica by his son, Alexandru Ghica. Eventually, the church was seriously damaged by a number of earthquakes and fires and was subjected to reconstruction.

The present church was built in 1852-1858 and painted in oil. Particularly notable is the altar screen, the work of painter Gh.Tattarescu.

In 1885, a strong wind destroyed some parts of the main façade which was immediately restored without sticking much to the original. In 1954, after a serious earthquake, full repairs had to be performed. On that occasion, two side balconies were added inside the church plus another one beneath the existing balcony designed for chorus. After 1966, the towers and arches were strengthened and the initial oak foundation was replaced with that of reinforced concrete.

The huge construction has retained its original neo-Gothic style. The form of the church is rectangular, consisting of a single nave preceded by a small vestibule which ends with the polygonal apse of the altar to the East. The entrance represents a small porch situated between the side towers with a central arch and two lateral narrow bays, supported by columns. Inside, the aisle is covered with a barrel vault system, arches and pendants, over which, in the centre of the nave, rises the main tower. Large windows are decorated with stained glass made in Vienna.

The Saint Spyridon the New Church (Romanian: Sfântul Spiridon Nou) is a Romanian Orthodox church in Bucharest, Romania on Calea Şerban Vodă, no. 29. Originally built with gothic influences, it was strongly modified by Patriarch Justinian (especially the towers).
Image Courtesy of Wikimedia and Andrei Stroe.
Sight description based on Wikipedia.