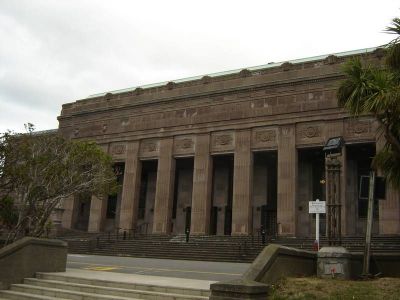 Prior to 1913, the Dominion Museum was known as the Colonial Museum. The Colonial Museum was originally housed in a small wooden building behind what is now the New Zealand Parliament Buildings. In 1930, the National Art Gallery and Dominion Museum Act 1930 established a board of trustees, leading to the building on Buckle street. The building housed the Dominion Museum, the National Art Gallery of New Zealand and the New Zealand Academy of Fine Arts (who had sold their land and donated the proceeds to the new organization on the provision that they would be accommodated).

The museum houses the Great War Exhibition, created by Sir Peter Jackson, commemorating the role played by New Zealand in the First World War. The exhibition is free for you to visit and will be here for the next 4 years. A donation is gratefully appreciated. Experience the gritty hardship and the horror of the battlefields as seen by those caught in the conflict. The Exhibition also offers you guided tours for a small fee. These depart every twenty minutes and are a great way to make the Exhibition come alive.
Image by Dick Bos on Wikimedia under Creative Commons License.
Sight description based on wikipedia