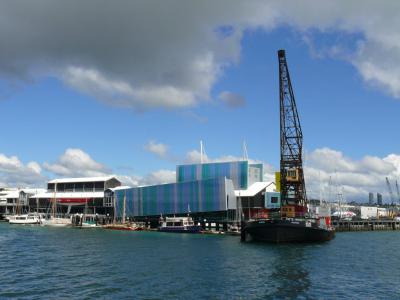 The New Zealand Maritime Museum in Auckland is the largest of its kind in the country. The seas surrounding the archipelago have always held an important place in the hearts and minds of New Zealanders from the times of the earliest settlers. Located on Hobson Wharf, the museum charts the nation’s seafaring history from early Polynesian explorers to modern maritime moments such as involvement in the America’s Cup. There is a wide range of permanent and temporary exhibitions that are open to the public as well as theatrical performances of the Polynesian settlement of the New Zealand archipelago.

In addition to a number of reconstructed or preserved ships in the building itself, the museum also owns a number of vessels that are normally berthed outside of the museum, including the 19th-century steam engine Puke and a floating steam crane from the early 20th century called Rapaki that can be entered and explored during normal museum visits.

Tip:
Try to visit around noon so you can catch the firing of the cannon!
The free guided tours will certainly add color to your visit, too.