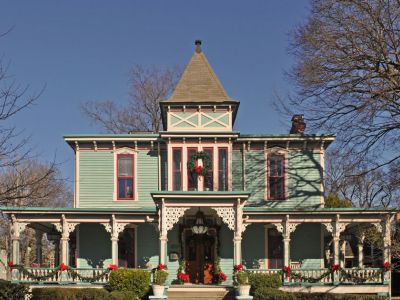 The Newcomb-Berryhill House is located on 9th Street in Charlotte's Historic Fourth Ward. It was built in 1884 by John H. Newcomb and his wife, Gussie. It represents the Victorian Italianate architectural style.

The Newcombs were important members of society in Charlotte. John, along with his brother, operated a bellows factory that quickly grew and expanded to include windows and sashes. Gussie, along with her sister, owned a very successful millinery.

The Newcomb's daughter, also named Gussie, married local grocer Earnest Berryhill. The two lived in the house at 9th Street, which is why it is referred to as the Newcomb-Berryhill House today. After the deaths of the Newcombs and Berryhills, the home was turned into an apartment complex. It declined over the years and was ultimately slated for demolition until the Junior League of Charlotte chose to purchase and restore it in 1975.

The home is now owned and preserved by Berryhill Preservation, Inc.
Image Courtesy of Flickr and Harshil Shah.