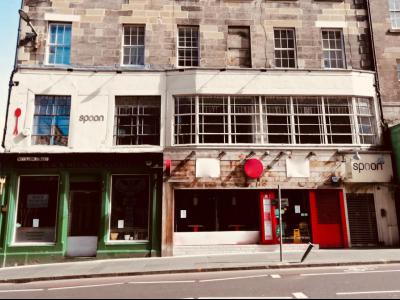 20+ years from the publication of Harry Potter And The Philosopher’s Stone it is now claimed that the birthplace of Harry Potter was in fact Nicholson’s Café, co-owned by Rowling’s brother-in-law back in 1997. Later, Rowling admitted that the original idea struck her on a train, without any paper at hand, but Nicolson’s, she said, was the place where she indeed “wrote huge parts of the book”. Attesting to this fact is also the local photographer, Marius Alexander, who pictured the then aspiring author writing at Nicolson’s following her move to Edinburgh with her daughter three years earlier.

Rowling explained her choice of Nicolson's – whose large windows overlook the University of Edinburgh – as a really great place to write, because there were so many tables around here that she didn't feel too guilty about taking her favorite table up too long. “I always wanted to try and get that one because it was out of the way in the corner,” she said.

Now rebranded as Spoon bistro, which The List magazine describes as a “Good-humoured eatery with casual all-day dining and chilled-out service delivering simply prepared bistro classics,” this place still retains great significance to the author and to every Potter-head out there as the Rowling-anointed nursery for Harry’s first adventure. A token to this is a plaque commemorating the spot where part of one of the world's most famous book series was written.

In her own words, Rowling promised to the place owners that when the book is published, she will “try and get [them] loads of publicity" though no-one ever dreamed for a moment that it was going to happen some day.
Image by 1march1hare on Wikimedia under Creative Commons License.