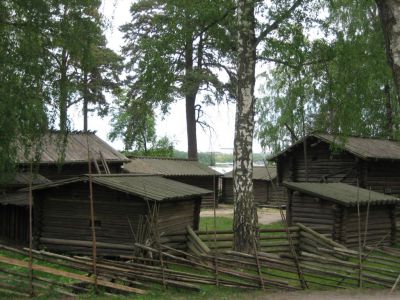 The Niemelä Tenant Farm represents the oldest set of buildings that have been brought to the Seurasaari Outdoor Museum. The oldest of the buildings is a very old smoke sauna. The main house dates from 1844. It is the only actual living quarters that have survived. A milk house and cooking shelter have also been preserved.

You can also find an old fishing shack, as well as five older outbuildings. Farm animals were kept here, and some of the outbuildings held the nets that were used for fishing. The boathouse would have been used to keep the sea vessels safe. You can also still see one of the tents that were used as a laundry. In the area, lines would have been hung to dry the clothing, once washed.

The open air museum in which these buildings are housed was opened to the public in 1909. It was modeled after the Skansen Open Air Museum of Stockholm, Sweden. The buildings that have been brought here are from various regions of Finland, and are designed to give the visitor an idea of what life was like in the country back in the late 1700s and early 1800s. There are 85 buildings in all.
Image by Pöllö on Wikimedia under Creative Commons License.

Seurasaari is a district in Helsinki that is located on an island. The island is home to the Seurasaari Open-Air Museum. The museum provides an overview of life in the Finnish countryside by showcasing houses from different parts of the country. This tour will show you some of the most interesting buildings in Seurasaari.