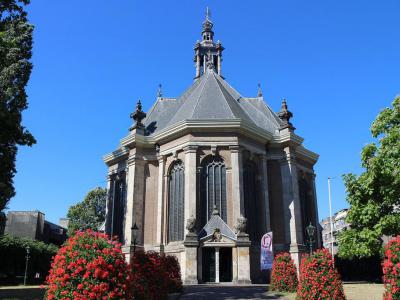 The Hague's Nieuwe Kerk (English: New Church) is a Protestant Dutch Baroque temple. The construction began in 1648, at the time of the Protestant conquest in The Netherlands, and was finished in 1656.

The design, by architect Pieter Noorwits, is rather unique and considered a highlight of the early Dutch Protestant church architecture. While the majority of Protestant churches at the time had a rounded floor plan, Noorwits designed two octagonal areas, connected by a slightly smaller section in which the pulpit was set, in accordance with the Protestant principle of centralization.

The design shows both Renaissance and Classicism elements. The two bells, measuring 100.2 cm and 81.5 cm in diameter respectively, were cast in 1656 by Coenraat Wegewaert, who also designed the church's clock.

Another notable feature, the organ, was built by the Dutch master Johannes Duyschot in 1702. It was adjusted in 1867 to suit the more modern Romantic music.

Up until the end of the 19th century, when the canals bordering the site were filled in, the Nieuwe Kerk could be accessed mostly by boat.

In the 20th century, further acoustical adjustments were made to the interior. In 1969 the building was closed for a long renovation and reopened as a concert hall.

Among the dignitaries buried at the Nieuwe Kerk is the 17th-century Dutch philosopher Baruch Spinoza.
Image by Suicasmo on Wikimedia under Creative Commons License.
Sight description based on wikipedia