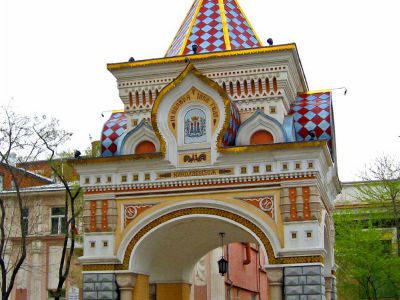 Notwithstanding its great historic background, the Nikolaevsky Triumphal Arch is a recent landmark of Vladivostok. Initially, the arch was built in 1891, following a decision by the Vladivostok City Duma to mark the arrival to Vladivostok of His Imperial Majesty Emperor Tsarevich Nicholas Alexandrovich - future Emperor Nicholas II. The arch was destroyed by the Soviets between 1927 and 1930. In 2003, it was carefully reconstructed. The arch has a structure of two cubic volumes, set on one another with a decrease in the upper half against the lower, and the crowning octagonal pyramid. The initial arch was designed by architect Konovalov and the reconstruction followed his style - late Russian-Byzantine, totally rich in details and recognized all over the world as the typical Russian style. The Nikolaevsky Triumphal Arch is called the eastern gate of Russia.
Image by Keith Clark, Hamilton, ON, Canada on Flickr under Creative Commons License.

Want to visit this sight? Check out these Self-Guided Walking Tours in Vladivostok. Alternatively, you can download the mobile app "GPSmyCity: Walks in 1K+ Cities" from iTunes App Store or Google Play. The app turns your mobile device to a personal tour guide and it works offline, so no data plan is needed when traveling abroad.