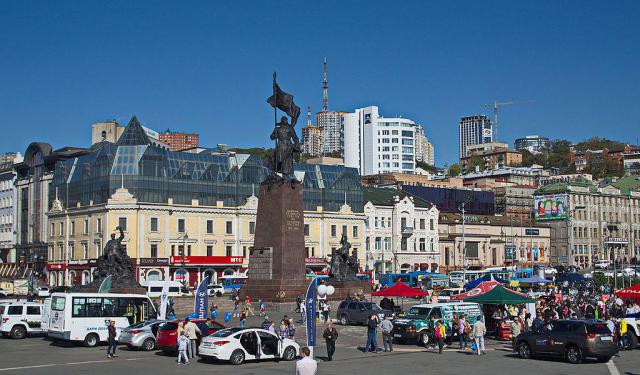 Image by Uwe Brodrecht on Wikimedia under Creative Commons License.

There's something special about Vladivostok – some say it's the way the city is surrounded by sea and mountains; others say that it's the many hills, which are responsible for the city’s nickname, “The San Francisco of Russia.” More than 50 years old, the public funicular should be tried at least once for the beautiful scenery it offers, but one can otherwise do everything on foot, since the downtown area is not that big after all. Follow this self-guided walk to explore some of Validivostok's key sights and take a ride for some great panoramic views as added treat!
How it works: Download the app "GPSmyCity: Walks in 1K+ Cities" from iTunes App Store or Google Play to your mobile phone or tablet. The app turns your mobile device into a personal tour guide and its built-in GPS navigation functions guide you from one tour stop to next. The app works offline, so no data plan is needed when traveling abroad.

Vokzalnaya Square is a great object of architecture situated in the heart of Vladivostok. Its main attraction is the Railway Terminal, which was built on the draft of N.V. Konovalov in 1912 and is considered one of the best throughout the Trans-Siberian Railway. The picturesque appearance of this station brings to mind many of the masterpieces of Russian architecture of the XVII century. In 1936, the station interiors were painted by artist G. A. Grigorovich, and twenty years later, V.I. Gerasimenko painted the ticket hall, creating a mural called "Our great motherland." In the building of the Railway Station you can also find rest rooms, restaurants, snack bars, a pharmacy and a bookstore.
Image by Vfp15 on Wikimedia under Creative Commons License.
2

Primorsky State United Museum "V.K. Arseniev" is the oldest museum in the Primorsky region. It was founded in 1884 and was designed in 18th century style. The building has 3 stores and is located in the heart of Vladivostok. In the museum there are several exhibitions of archaeology, ethnography, the development and settlement edge, Old Vladivostok, history of the region during the Soviet period, the exposure of nature and ecology of the Primorsky Territory, geological exposition and a number of mobile, temporary ornithological exhibitions.
Image by watchsmart on Flickr under Creative Commons License.
3

Admiral Fokin Street, or, as nicknamed by the locals "Arbat" after the famous shopping street in Moscow, is a landmark of Vladivostok and is a most polished and tourist-friendly area. As a quintessentially market street, there are popular stores, cafes, bar and souvenir shops; many locals and mostly tourists enjoy spending quality time browsing through small shops and snack bars. The street is especially beautiful in the summertime, as the fountains and flower-beds give this wind-battered Eastern city a very southern-European provincial look.
Image by Sistak on Flickr under Creative Commons License.
4

4) Monument to the Fighters for Soviet Power (must see)

The monument to the Fighters for Soviet Power is located in the central square of Vladivostok, that links most important arteries of the city, for example Svetlanskaya Street and Okeansky Avenue. Quite the postcard landmark for Vladivostok, it was built in 1961 and is still the biggest monument in the city. The sculptor is Alexey Teleta. The monument is a classical socialist statue representing a soldier towering over the square at a height of 30 meters. The bronze figure of a soldier of the Red Army faces the ocean. In the right hand he squeezes the shaft of waving banners and in the left hand, a battle trumpet announcing the victory of the revolution in 1922. The marble foundation on which the monument stands is a popular place for young people to ride on skateboards.
Image by nilska on Flickr under Creative Commons License.
5

GUM, Glavnyi Universalnyi Magazin; literally "main universal store", is one of the oldest soviet style shopping centers in Vladivostok. This prominent elegant structure, formerly known as the Kunst and Albers Trading House was built in 1907 and is a fine example of Art Nouveau architectural style with Baroque elements. The store features a wide selection of different products and traditional Russian souvenirs. GUM store is open Monday to Saturday from 10am to 8pm, Sundays 10am to 7pm.
Image by Ellmer on Flickr under Creative Commons License.
Sight description based on wikipedia
6

Notwithstanding its great historic background, the Nikolaevsky Triumphal Arch is a recent landmark of Vladivostok. Initially, the arch was built in 1891, following a decision by the Vladivostok City Duma to mark the arrival to Vladivostok of His Imperial Majesty Emperor Tsarevich Nicholas Alexandrovich - future Emperor Nicholas II. The arch was destroyed by the Soviets between 1927 and 1930. In 2003, it was carefully reconstructed. The arch has a structure of two cubic volumes, set on one another with a decrease in the upper half against the lower, and the crowning octagonal pyramid. The initial arch was designed by architect Konovalov and the reconstruction followed his style - late Russian-Byzantine, totally rich in details and recognized all over the world as the typical Russian style. The Nikolaevsky Triumphal Arch is called the eastern gate of Russia.
Image by Keith Clark, Hamilton, ON, Canada on Flickr under Creative Commons License.
7

This little chapel is another newly-added landmark of Vladivostok, located right on the Korabelinaya Seafront. The construction of the chapel began on August 10th, 2004, and the chapel was consecrated on May 12th, 2005, by the Archbishop Veniamin of Vladivostok; it was given the name St. Andrew. The chapel is a small, one-domed white temple, that can host about 40-50 people. It was designed by architects of the Far East State Technical University in a late Russian-Byzantine style. Inside, the chapel is decorated with Orthodox icons featuring military-ecclesiastical thematics.
Image by Keith Clark, Hamilton, ON, Canada on Flickr under Creative Commons License.
8

Vladivostok has always been the base city of the Russian Pacific fleet. One of historical artifacts of the Soviet navy heritage is Memorial Submarine S-56 Museum. During World War II, this submarine sailed in dangerous waters of the Atlantic Ocean under the command of captain Chedrin and is said to have sunk ten German ships. The boat was returned to the Pacific Ocean fleet in 1951 and served as a training vessel. In 1975 S-56 became a memorial and a museum. Step inside to discover the pride of the military navy of the past. Open from Wednesday till Sunday: 10 am- 6 pm. Closed on every last Friday of the month.
Image by pauk on Wikimedia under Creative Commons License.
9

Krasny Vympel (Red Pennant), Steamboat is another naval heritage of Vladivostok. It was built in 1911 in Finland. The guard boat participated in Russian Civil War military actions and is often called Aurora of the Far East in connection to the famous ship that gave the signal to attack Winter Palace - the residence of the Tsar. The name of captain Zavoiko is linked with the history of the vessel. He is known to have escaped from captivity when sailing into the open sea. Upon arrival back in Vladivostok in 1923, the boat became the first ship of the new Soviet Pacific Navy. Krasny Vympel also participated in naval battles against Japan during World War II. It 1958 the boat became a memorial and a museum. Open Wednesday through Sunday from 10am to 6pm.
Image by Ondřej Žváček on Wikimedia under Creative Commons License.
10

Pacific Fleet Museum was established in 1950 by Captain Sushkov. The museum’s headquarters, initially situated in an old Lutheran church, were relocated in 1997 to another prominent landmark of Vladivostok, namely a beautiful Neo-classical building that was built at the very beginning of the 20th century and first served as a navy officers’ residence. The exciting exhibitions of the museum cover a long history of the Russian pacific fleet featuring navy ships’ guns, equipment, photographs, prints and documents. The museum is open Wednesday to Sunday from 10am to 6pm, and closed on every last Friday of the month.
Image by volgogradman on Flickr under Creative Commons License.
11

Vladivostok Funicular is the only funicular system in the Russian Far East. It is located on the slope of an Orliny (eagle) hill, facing the Golden Horn Bay, and is in business since May 1962. Construction began in 1959 upon the initiative of Nikita Khrushchev, after he visited the United States and set Vladivostok to become "a second San Francisco." The funicular links Sukhanova Street (the upper station) and Pushkin Street (the bottom station), passing over Vsevolod Sibirtseva Street. The length of the routes is 183 meters, with the average travel time between 3 and 5 minutes. While traveling up and down, you have marvelous views of the city and the Golden Horn Bay.
Image by Andrey "A.I." Sitnik on Wikimedia under Creative Commons License.
12

Right above the upper station of the Vladivostok Funicular is the most famous observation platform of Vladivostok. It is located on the grounds of one of the campuses of the Far East State Technical University. Here you you can enjoy the most comprehensive panorama of the whole city, the port and the Golden Horn Bay, and the surrounding hills. The platform is landmarked with the statue of Saints Cyril and Methodius, the founders of the Slavonic Alphabet.
Image by xJasonRogersx on Flickr under Creative Commons License.