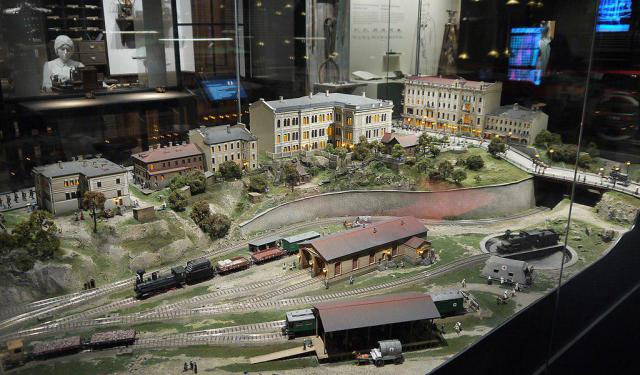 Image by Harveyqs on Wikimedia under Creative Commons License.

Vladivostok’s strategic position ensured the development of the Pacific Fleet in the region. Numerous memorials and museums in the city display artifacts related to the exploration of the area and its contribution to Russian Civil War and World War II naval battles. Take this self-guided walking tour to visit Vladivostok's most exciting museums.
How it works: Download the app "GPSmyCity: Walks in 1K+ Cities" from iTunes App Store or Google Play to your mobile phone or tablet. The app turns your mobile device into a personal tour guide and its built-in GPS navigation functions guide you from one tour stop to next. The app works offline, so no data plan is needed when traveling abroad.

Krasny Vympel (Red Pennant), Steamboat is another naval heritage of Vladivostok. It was built in 1911 in Finland. The guard boat participated in Russian Civil War military actions and is often called Aurora of the Far East in connection to the famous ship that gave the signal to attack Winter Palace - the residence of the Tsar. The name of captain Zavoiko is linked with the history of the vessel. He is known to have escaped from captivity when sailing into the open sea. Upon arrival back in Vladivostok in 1923, the boat became the first ship of the new Soviet Pacific Navy. Krasny Vympel also participated in naval battles against Japan during World War II. It 1958 the boat became a memorial and a museum. Open Wednesday through Sunday from 10am to 6pm.
Image by Ondřej Žváček on Wikimedia under Creative Commons License.
2

Vladivostok has always been the base city of the Russian Pacific fleet. One of historical artifacts of the Soviet navy heritage is Memorial Submarine S-56 Museum. During World War II, this submarine sailed in dangerous waters of the Atlantic Ocean under the command of captain Chedrin and is said to have sunk ten German ships. The boat was returned to the Pacific Ocean fleet in 1951 and served as a training vessel. In 1975 S-56 became a memorial and a museum. Step inside to discover the pride of the military navy of the past. Open from Wednesday till Sunday: 10 am- 6 pm. Closed on every last Friday of the month.
Image by pauk on Wikimedia under Creative Commons License.
3

Pacific Fleet Museum was established in 1950 by Captain Sushkov. The museum’s headquarters, initially situated in an old Lutheran church, were relocated in 1997 to another prominent landmark of Vladivostok, namely a beautiful Neo-classical building that was built at the very beginning of the 20th century and first served as a navy officers’ residence. The exciting exhibitions of the museum cover a long history of the Russian pacific fleet featuring navy ships’ guns, equipment, photographs, prints and documents. The museum is open Wednesday to Sunday from 10am to 6pm, and closed on every last Friday of the month.
Image by volgogradman on Flickr under Creative Commons License.
4

4) House-museum of family Suhanovyh (must see)

A branch of Primorsky States United Museum, Museum of Suhanov family is one of few remaining residences built at the beginning of the 19th century. A century ago a senior adviser to Primorsky Regional Board Sukhanov lived here. He is known to have made important contributions to the development of the city and the region. Seven rooms of the mansion include photographs, antique furniture, household items, documents and numerous unique objects. There is also a musical room that exhibits old musical instruments such as an organ, a piano, a balalaika, a gramophone player and others. The museum is open daily from 10 am to 7 pm.
Image by Jon Olav on Flickr under Creative Commons License.
5

5) Museum of Military Glory of the Pacific Border District

Situated in a heritage building built in 1952 by architect L.B. Butko, the Museum of Military Glory of the Pacific Border District is another reminder of the historical importance of Russia's easternmost city. The museum was opened in 1985. It houses a large collection of more than 8,000 exhibits from old prints and documents to military uniforms and weapons. Among the numerous collections of the museum there is a numismatic collection and archaeological artifacts, as well as an arms collection with its exciting display of weapons beautifully arranged and classified in chronological order.
Image by Michael Lewis on Wikimedia under Creative Commons License.
6

Primorsky State United Museum "V.K. Arseniev" is the oldest museum in the Primorsky region. It was founded in 1884 and was designed in 18th century style. The building has 3 stores and is located in the heart of Vladivostok. In the museum there are several exhibitions of archaeology, ethnography, the development and settlement edge, Old Vladivostok, history of the region during the Soviet period, the exposure of nature and ecology of the Primorsky Territory, geological exposition and a number of mobile, temporary ornithological exhibitions.
Image by watchsmart on Flickr under Creative Commons License.
7

The Memorial House Museum of Vladimir K. Arseniev is another house-museum in Vladivostok and Russia, with a prominent character. Traveler, writer and scientist Vladimir Arseniev has been the driving force behind the organization of expeditions to Kamchatka and other northern regions of Russia. The house has been a major gathering spot of the city’s intellectual elite. It houses original furniture, household items, numerous archaeological findings and objects related to the exploration and development of the Far East. To this day the museum is often used for lectures, seminars, artwork exhibitions and other cultural activities. The museum is open daily from 10am to 7pm.
Image by Post of the USSR on Wikimedia under Creative Commons License.
8

The Oceanarium is a maritime museum which represents Vladivostok's under-water life. The museum has a dry and lively exposition devoted to the nature of the Pacific Ocean and has two exhibition halls. There is a large round room with 13 aquariums in which there are 120 species of fish, animals and freshwater bodies found in Peter the Great Bay and tropical seas. You can also see the diorama seal rookeries and bird colonies, a collection of sea shells, corals and sponges. Near Oceanarium, in the waters of Amur Bay, is the Dolphinarium. Here you can see the beluga whales and sea lions.
Image by Jason Rogers on Wikimedia under Creative Commons License.
9

Vladivostok Fortress is a monument representing the defensive architecture of Vladivostok. This is the only Russian naval fortress included in the list of unique military historical monuments by UNESCO. Officially, it became a fortress on August 30th, 1889. By 1916, it was the largest maritime fortress of Russia. Now it consists of more than 400 square km, on which about 130 different forts have been built, including fortifications, strong points and shore batteries, equipped with 400,000 guns.
Image by xJasonRogersx on Flickr under Creative Commons License.