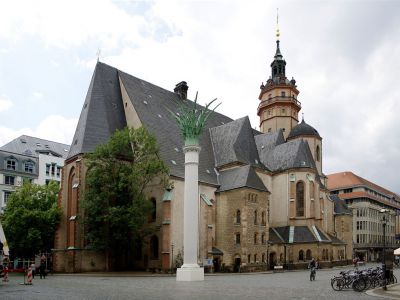 One of the most important churches of Leipzig is named for St Nicholas, the patron saint of travelers and merchants. The church started in 1185 as a Romanesque-style edifice with two look-alike towers. It was enlarged and redone in the 16th century in the Gothic "hall church" style, which features a nave and aisles of approximately equal height, united under a single immense roof. The Baroque-style central tower was added in 1730.

The interior was remodeled in 1797, in a Neoclassical style, by architect Johann Carl Friedrich Dauthe. Inside, the apse is semicircular with a barrel vault roof. The narrow nave is supported by graceful Egyptian-style columns, with palm-shaped capitals. The interior colors are in two pastel shades of pale green and dusty rose.

The church hosted four of the five premier performances of Johann Sebastian Bach's Passion of St. John in 1724, 1728, 1732, and 1749. Several of his cantatas and oratorios were performed by the St. Thomas Choir of Leipzig (Thomanerchor), a boy's choir with a tradition of more than 800 years in music and city history.

From 1989 to 1991, people would gather at St. Nicholas every Monday evening. The meetings were not formal. They led to ad hoc protests against the Communist East German Government. Cabaret artist Bernd-Lutz Lange declared of the revolution: "The head was the St. Nicholas Church and the body the center of the city."

The authorities were thrown off balance, as they were expecting violence. But that never occurred, violance were not in the playbook. A monumental column stands outside the church today. Close to the Neoclassical column, colored panels in the pavement light up after dark, telling the story of the Monday night marchers.
Image Courtesy of Wikimedia and Appaloosa.