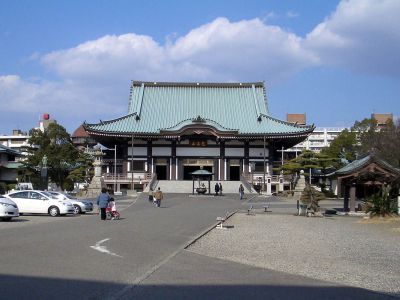 Nittai-ji, or Kakuōzan Nittai-ji, is a Buddhist temple located in the Chikusa ward of Nagoya. It was constructed in 1904 as a repository for the ashes of the Gauthama Buddha, which were the gift of King Chulalongkorn of Thailand. Therefore it was named the "Japan-Thai Temple", which is "Nittai-ji" in Japanese. The temple's name also stand for "auspicious king" in honor of the Buddha, and "Japan-Thai" for the friendly relations between the two nations. This nonsectarian Buddhist temple has many international influences, which are reflected in its architecture.

King Bhumibol Adulyadej donated an additional Buddhist image and a tablet to the temple. Each month on the 21st day, the approaches to the temple play host to a large flea-market. The closest subway is Kakuōzan Station with the Higashiyama Line.
Image by Mercy758 on Wikimedia under Creative Commons License.
Sight description based on wikipedia