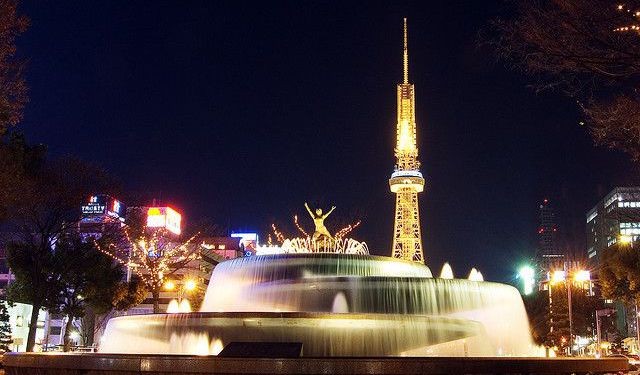 The Naka Ward (or Naka-ku) district is the central neighborhood of Nagoya. This area should be at the top of the list for any visitor to the city, because it’s home to a vast number of amazing attractions. Here you can visit: a peaceful Japanese park; a fine Nagoya Orchid Garden; a gorgeous Osu Kannon Temple; and the imposing Nagoya TV Tower. Take our Naka Ward tour to see all the top sights in the district.
Image Courtesy of Flickr and Paul Davidson.
How it works: Download the app "GPSmyCity: Walks in 1K+ Cities" from iTunes App Store or Google Play to your mobile phone or tablet. The app turns your mobile device into a personal tour guide and its built-in GPS navigation functions guide you from one tour stop to next. The app works offline, so no data plan is needed when traveling abroad.

The Nagoya TV Tower is the oldest TV tower in Japan, and was completed in 1954. It is located in the centre of Hisaya Ōdori Park. The tower is 180 metres high, and has two main observation decks at the heights of 90 metres (the indoor Sky Deck) and 100 metres (the outdoor Sky Balcony). The tower also includes a restaurant and gallery at 30 metres. Nagoya TV Tower closely resembles the Eiffel Tower. The famous movie monster, Godzilla pulled the tower down in Mothra vs. Godzilla (1964), and twenty-eight years later, it was destroyed again in the 1992 remake, Godzilla vs. Mothra. This time around, it is demolished by the monster Battra, when the creature attacks Nagoya.
Image Courtesy of Wikimedia and pastaitaken.
Sight description based on Wikipedia.
2

The Hisaya Ōdori Park was laid out after the devastation of World War II by the mayor of Nagoya, in order to create green space in the middle of the city. It acts as a central park within the downtown area and has over the years been laid out with many trees, water fountains and works of modern art such as sculptures and other installations. The park is around 2 km long and stretches roughly from north to south. Nagoya TV Tower is located in the middle of the park. The park is also the venue of the annual Nagoya Festival, which attracts many visitors.
Image Courtesy of Flickr and Marufish.
Sight description based on Wikipedia.
3

The Nagoya Orchid Garden, also known as the Ran no Yakata Orchid Garden, is conveniently located just a short walk from Nagoya Yaba-cho Station. Opened in 1998, the garden is a wonderful place to come and see more than 250 different species of orchids and other plants.
Image Courtesy of Flickr and Kaeko Hata.
4

Banshō-ji is a small temple located in Ōsu in central Nagoya.

Lord Oda Nobuhide (1510?-1552) built this Sōtō Buddhist temple in the then village of Nagoya in 1540, and invited the priest Daiun to open it. Kato Kiyomasa (1562-1611) stayed at the temple, which served as his quarters while he was engaged in the construction of Nagoya Castle. The temple was rebuilt in 1610 at its present site.

Directly located at the main street is the stone gate. Two kitsune (fox spirits) guard the entrance. Many paper lanterns give light.

Image Courtesy of Wikimedia and Gryffindor.
Sight description based on Wikipedia.
5

Nestled within the Naka ward you’ll find this beautiful tiny park. Inside there’s a magnificent round fountain with a statue of an angel at its center. Known as the Osu Angel Statue, this sculpture stands tall as if to watch over the city and its inhabitants.
Image Courtesy of Joseph F. Warren.
6

Ōsu Kannon, or Kitanosan Shinpuku-ji Hōshō-in, is a Buddhist temple of the Shingon sect located in Ōsu in central Nagoya. It belongs to the Owari Thirty-three Kannon. The temple was originally built in about the year 1333 in Ōsu-gō, Nagaoka village in Owari Province, which is currently known as the city of Hashima in Gifu Prefecture. Construction was sponsored by the Emperor Go-Daigo, who appointed Shōnin Nōshin as the first head priest. Nōshin had a vision in a dream of Avalokitesvara, the Buddha of Compassion, known as Kannon in Japanese. Hence, the name Ōsu (from Ōsu-gō) Kannon.

Due to repeated flooding, the temple was moved to its present location in 1612 by Tokugawa Ieyasu. In the 1820s, large parts of the temple were destroyed by fire, but it was rebuilt in the 1970s. The main hall has a very large, red paper lantern hanging from the ceiling where worshippers can tie small paper notes with wishes to the holding wires.

The current temple is home to a large collection of books. It houses about 15,000 classic Japanese and Chinese works. Among these is the oldest hand-written copy of the famous Kojiki, describing the ancient mythological history of Japan. The library also has many other books designated as national treasures and important cultural properties. A street fair is held on the 18th day of each month. The nearest subway is Ōsu Kannon Station.

Image Courtesy of Wikimedia and 日本地理.
Sight description based on Wikipedia.
7

The Shirakawa Park, situated in central Nagoya, is the site of several of the city’s most important attractions. Both the Nagoya City Science Museum and the Nagoya City Art Museum are here, as well as a beautiful fountain and wonderful flowers and trees.
Image Courtesy of Flickr and emrank.