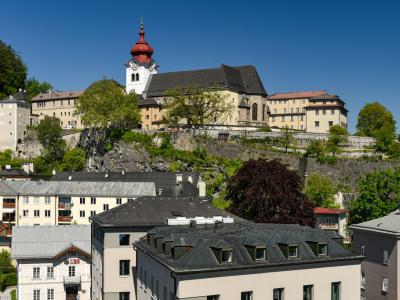 The Nonnberg Convent is the oldest continuously existing nunnery in the German-speaking world. The monastery complex is today a protected monument and part of the Historic Centre of the City of Salzburg, a UNESCO World Heritage Site since 1996. The church of the convent, the Maria Himmelfahrt is the second oldest church dedicated to the Virgin Mary in Salzburg.

The convent was established between 713 and 715 by St. Rupert. He placed it under the control of his sister St. Erentrudis who became the first Abbess. The complex that makes up the Nonnberg Convent includes the Maria Himmelfahrt church, the cloisters, a hall with pillars, the convent, the kitchen court, the dining hall, the St. John’s Chapel, the Pieta Chapel, and other small buildings.

The Maria Himmelfahrt church was built in 1463. It is a simple gothic structure with a baroque principal altar and side altars dating back to 1515. The principal altar depicts the Virgin Mary between St. Rupert and St. Virgil. At the back of the church are Roman frescoes painted around 1140. The Romanesque West Tower was constructed in the 12th century and was remodeled in Baroque style during the 19th century. It contains a crypt containing the tomb of the first abbess St. Erentrudis. The St. John’s Chapel has a magnificent winged gothic altar donated by the Prince Archbishop Wolf Dietrich. The convent also houses a museum that is open occasionally to scholars and researchers. Maria von Trapp, the author of the book, 'The Story of the Trapp Family Singers' that later became the well known Hollywood movie, 'The Sound of Music' was a novice at the nunnery.

***The Sound of Music Movie***
Nonberg Abbey (Stift Nonnberg) is probably the most famous of all The Sound of Music sites in Salzburg. Founded by Saint Erentrudis, the niece of Saint Rupert (Bishop of Worms) in 712-715, this historic Benedictine Convent is the oldest abbey in the German speaking world. Perched high over the east side of Salzburg, it made an excellent location for many powerful scenes in the movie.

It was also here that the real-life Maria (Maria Augusta Kutschera), aged 19, came to live in 1924, stayed for two years as a nun apprentice, became a tutor for one of the widowed Captain Von Trapp’s sick children, and then married him on November 26th, 1927, 11 years before the Nazis took over the city. At the time of her marriage, Maria was 22 and Georg – 47.

The scene of their wedding was filmed at Collegiate Church in Mondsee Austria. The majority of the indoor scenes were shot in a California studio, as well as that with the nuns singing ‘Maria’ in the convent courtyard. Filming inside the courtyard was not allowed, so they had to do it at a re-created set in Hollywood and a small studio in Salzburg. Still, there were four iconic scenes shot on the actual grounds, near the gate, including those in which Maria leaves the abbey wondering “What will this day be like?”, the nuns talk about Maria, the children come to visit, and the Nazis on the hunt for the Von Trapps after their escape, upon which the nuns disable their car.

At the time of the filming, there were 50 nuns residing in the convent; now there are only 14 left (as at 2017). Each morning at 6:45am the resident nuns gather to sing Gregorian chants in Latin which is a real treat.

Why You Should Visit:
If you want to get off the beaten path and see a church that seems unaffected by the passing of time, this is a great stop!

Tip:
For some of the finest Romanesque & Gothic artwork in Austria and Europe, go to the Convent's museum ("Stiftsmuseum").
Make sure you also have some 50-cent coins to light up the area at the back of the church and see frescoes or the altar.
Image by Altzinger on Wikimedia under Creative Commons License.