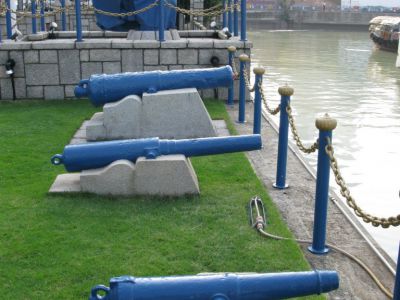 The Noon Day Gun is a former naval artillery gun, mounted on an enclosed site located near the Causeway Bay Typhoon Shelter in Hong Kong. The gun is owned by Jardine Matheson and fired at noon every day. The Noonday gun is a popular tourist attraction.

Originally known as East Point, the Noon Day Gun is now located on a part of Causeway Bay. In 1841, East point was sold by the British colonial government in Hong Kong by public auction. This was the first plot of land to ever be sold in this way by the colonial government and it was purchased by Jardine Matheson. The name, East Point has now been disused, due to a drastic change in the geographical profile of the area caused by land reclamation.

During the 1860s, the private militia of Jardine Matheson used to fire a gun salute in order to welcome Jardine’s arrival by sea. This annoyed a senior British naval officer who declared that such a salute is reserved for government officials and the senior officers of the armed forces only. He ordered Jardine Matheson to fire the gun everyday at noon for perpetuity. This launched the tradition of the Noon Day Gun, firing at noon every day, even today.
Image by Baycrest on Wikimedia under Creative Commons License.