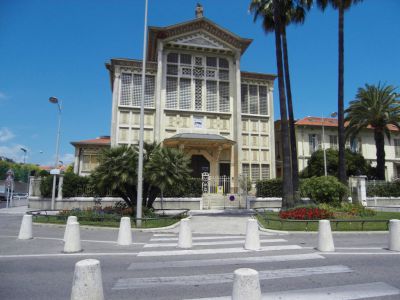 This very old church is the home of one of the smallest parishes in Nice. You can visit the location on Don Bosco road, and it is located near the high school there. It has a fair bit of historical significance though, as it represents the very first church built in the country by the Salesian religious order. The group was organized by Don Bosco in 1859 in Turin.

The designer of the church was Jules Lefebvre. It was also worked on by Marius Deporta. It is noted in the some of the historical documents surrounding the construction of the building that the designers wanted to make it look a lot like Notre Dame Raincy Church of Auguste Perrett.

The architecture is can be classified as art deco. In looking at the outside of the building, one might think that they were visiting a villa of France. Once you get inside, though, you will find one of the largest sanctuaries of any church in the city. The painting of the Way of the Cross that was done on the inside was the inspiration of Eugene Doucet. It took over ten years to paint. You will also want to take note of the beautiful and colorful ceiling of the church. It has a blue and gold colored cross painted across a total surface area of over 2600 feet. It is quite breathtaking.
Image by masterpsx on Wikimedia under Creative Commons License.

Nice is considered one of the oldest cities in the world. Due to its location and climate, Nice attracted many famous painters. Because so many artists have resided here, there are a large number of art museums. Check out the most visited ones in Nice in this next self-guided tour.

Nice is a very interesting city with activities for all ages and tastes. There are museums, galleries, historical buildings and theaters for people who love art in all its forms. For younger crowds there are clubs, pubs, bars and parks. There are also places for families that parents and children can enjoy. Take the following tour to discover the most popular attractions for kids.

Thanks to its history, the culture and architecture of Nice is diverse and very beautiful. The influences of Gothic, Italian, Latin and Genoese styles define the architecture of Nice. The beauty of this blend of styles is seen in the old buildings, churches and palaces. Take this tour to discover the masterpieces of art made by people centuries ago which are preserved to this day.