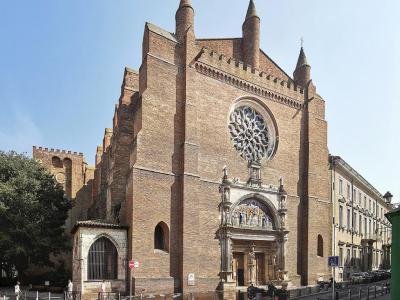 In 410 the Emperor Honorius allowed the conversion of pagan temples within the empire. And so the Temple of Apollo in the city of Tolosa was converted to Christianity. The new church was the original Notre-Dame de la Dalbade. It was replaced in 541 by another Notre-Dame, which served faithfully until burning down in 1442.

The present Notre Dame also served faithfully without serious incident until 1926, when its tower collapsed, destroying much of the church and killing two unlucky bakers on their way to work. The interior was restored. And then Toulouse had a 15th century church with a 20th century inside. The tower was never replaced, which may be a good thing.

Over the entrance is a renaissance tympanum with a copy of Fra Angelico's Coronation of the Virgin. The second Notre Dame was covered with lime. This resulted in a vision of pure whiteness. Many felt this effect was a tribute to the Virgin Mother. After the fire of 1442 the outside was rebuilt with the red brick of Toulouse. Now it was red outside.

Inside, outside, 15th century, 20th century, red, white, in spite of all this, the church stands. The colorful Italian-Renaissance entrance welcoming all who enter. Apollo would have been pleased.
Image Courtesy of Wikimedia and Didier Descouens.