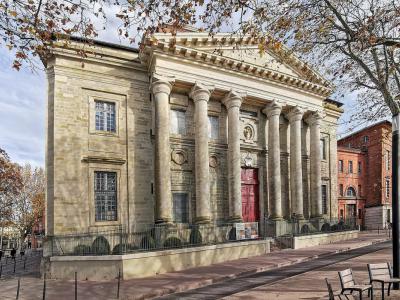 Notre-Dame de la Daurade is a basilica established in 410 when Emperor Honorius allowed the conversion of pagan temples to Christian places of worship. The original building of Notre-Dame de la Daurade was a temple dedicated to Apollon. During the 6th century, a church, decorated with golden mosaics, was erected at the site. Its current name derives from the ancient Latin name “Deaurata”, meaning gold. It became a Benedictine monastery during the 9th century.

After a period of decline, which began in the 15th century, the basilica was destroyed in 1761. The buildings were later restored and a new church rebuilt, but the monastery was closed during the French Revolution and became a tobacco factory. The current edifice was built during the 19th century. The church has been listed as a historic monument by the French Ministry of Culture.
Image Courtesy of Wikimedia and Didier Descouens.
Sight description based on Wikipedia.