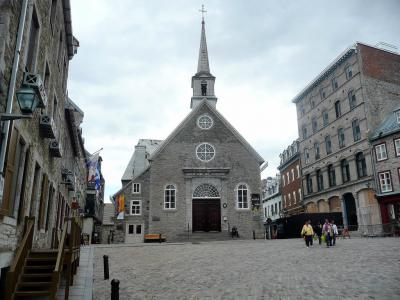 The oldest stone church in Québec, Église Notre-Dame-des-Victoires (originally named l'Enfant Jesus) was built on Place Royale in 1688, on the site of l'Abitation, Québec's first building. While the structure seems to get an updating/face-lift every century or two, there remain some original parts dating back to the 1600s. In the basement, for instance, you can still see one of the original walls, and archaeological digs have uncovered one of the building's original turrets in the facade.

Once you are in Basse-Ville (the lower Quebec City), you'll probably walk right by the front of this church. There is no charge for going in and it will only take moments of your time, but will leave you with lasting memories. Although rather austere, the interior takes visitors back to another time, featuring several paintings from the 17th, 18th, and 19th centuries. Unique to Québec, the frescoes on either side of the main altar retrace the history of the church and city, and were done by local painter and decorator Jean-M. Tardivel. The most striking accent, however, is the single ex-voto, a model of a vessel that arrived in 1664, which hangs suspended over the pews.