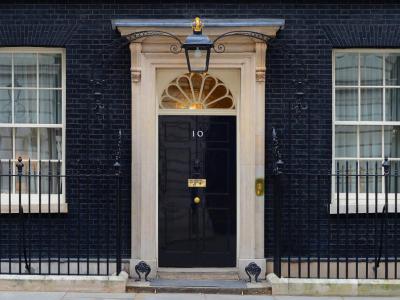 10 Downing Street, or simply “Number 10”, is the official residence and the office of British Prime Minister. It has been UK's no. 1 address for almost 300 years. The building contains over 100 rooms and was once three separate houses, now combined. A private residence in which the Prime Minister's family lives is on the third floor and their kitchen is in the basement. The other floors contain offices and numerous conference and reception rooms. There is an interior courtyard and, in the back, a terrace overlooking a half-acre garden. The Cabinet Room is separated from the rest of the house by soundproof doors.

The famous black front door is actually made of reinforced steel, rather than wood as most people may erroneously believe. This door has no keyhole and can only be opened from the inside, for which purpose there's always a doorman on duty. Speaking of that, the expression “In the hot seat” literally originates in Downing Street. A large black chair in the entrance hall of Number 10 is the seat previously used by the night watchman. This chair has an underneath drawer which, back in the day, was filled with hot coal to keep the guy on duty warm during long, cold night hours. The lamp above the door, the lion door knocker and the black and white floor in the entrance hall are also the iconic features. They were all added under the premiership of Lord Frederick North between 1770 and 1782.

Just as many other London properties, Downing Street suffered damage during WWII. On 14 October 1940, a bomb falling nearby hit the kitchen and state rooms. In 1991 another – mortar attack perpetrated by IRA – shuttered 10 Downing Street again. A reminder of that attack is the splinter stuck in the plasterwork upstairs, left untouched.

The walls of the Grand Staircase are lined with portraits of every British Prime Minister in chronological order. During his years as prime minister, Tony Blair had six plaster bees commissioned in the window frames in one of the drawing rooms upstairs. Under Mrs. Thatcher, there was a little model roof Thatcher built into one of the door frames. None of this, however, is open to a public eye, as the entry to Number 10 is strictly forbidden to the general public for security reasons. Only staff and authorized personnel are allowed in.

*** Harry Potter Movie***
Contrary to what many habitually perceive in their every-day life as solely the home and office of the British Prime Minister, the number 10 Downing Street is also where, according to the first chapter of “Harry Potter and the Half Blood Prince,” is a portal between the wizarding world and the muggles world, through which leader of the U.K. can occasionally communicate with the Minister for Magic.

It is also here that the magician Kingsley Shacklebolt operate undercover as a protector of the Prime Minister in a war against the evil magical forces led by Lord Voldemort. Apparently, there is more to this place than meets the eye…

Tip:
Recommended as part of a much wider visit to Whitehall and Westminster as a whole.
Image Courtesy of Wikimedia and Sergeant Tom Robinson RLC.