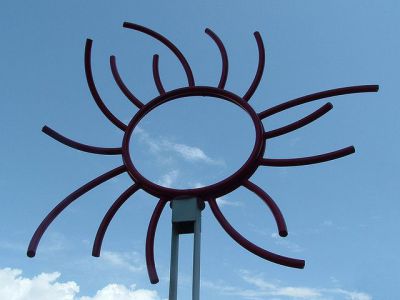 The Bob Kerrey Pedestrian Bridge is a 3,000 ft (910 m) footbridge across the Missouri River between Council Bluffs, Iowa and Omaha, Nebraska. It opened on 28 September 2008. The bridge is named after former Nebraska Senator Bob Kerrey, who secured $18 million of federal funding for the bridge in 2000. The bridge was redesigned in 2004 after the lowest bid for the project was $44 million. In May 2006, a final cable-stayed bridge design by Kansas City engineering and architectural firm HNTB was selected for the bridge.

The bridge is north of the I-480 girder bridge and connects the Port of Omaha's Miller Landing to One Renaissance Center in the former Dodge Park Playland in Council Bluffs, making it the first ever pedestrian bridge to connect two states. The bridge lights include programmable controls that can display multiple colors in the large lights at the top of the towers and alter brightness and timing of the lights that run the entire length of the bridge.
Image by c r i s on Flickr under Creative Commons License.
Sight description based on wikipedia