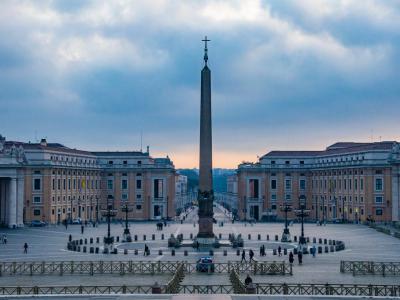 Everyone always associates obelisks with Egypt, but today there are more of these slender monuments in Rome than anywhere else in the world, with eight ancient Egyptian ones and five ancient Roman ones. These monuments were raised usually as a single block in front of pyramids or Egyptian temples and they symbolized the sun god Ra. Ancient Romans often dedicated their to their current ruling emperor; these weren’t adorned with hieroglyphics.

The obelisk that stands in St Peter’s Square was brought from Egypt to Rome by the Emperor Caligula in 37AD and he had it set up in the center of his circus (later known as the Circus of Nero). Transporting obelisks was a difficult process and huge boats – “obelisk boats” – were specially constructed to carry them.

When Sixtus V became pope, he was determined to move the obelisk to the center of what was to become St Peter’s Square. The move was orchestrated by the architect and engineer Domenico Fontana, Giacomo della Porta’s assistant during the construction of the basilica. It took three weeks to move the monument on rollers and forty-seven cranes, 140 carthorses and over 1000 men to set it up in its new home. At one time a bronze globe, believed to contain the ashes of Julius Cesar, topped the obelisk, but Pope Sixtus V replaced it with his symbol of three mountains topped by a star.
Image by Sarah Nichols on Flickr under Creative Commons License.
Sight description based on wikipedia