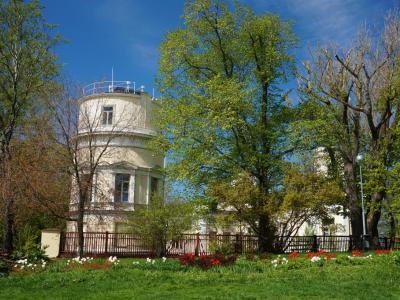 Observatory Hill is the location of the institution that used to be in Turku. This spot was actually Finland’s first observatory. It was built in 1819. Sadly though, a huge fire destroyed the city in 1827, including this institution. So, Tsar Nicholas I ordered the location to be moved to Helsinki, along with the University that was being developed.

The famous architect Carl Engel drew up the design that was used for the place. He is well known for many buildings that still reside in downtown Helsinki. The new observatory was completed in 1834, and was considered one of the best built to that point in history.

The hill itself is also quite famous, as it used to be the place where signal fires were lit when danger was approaching the city. The fires from “Fire Hill”, as the locals called it, could be seen for miles. Eventually, this place was developed into a lovely park also. While you are here, you may also want to see the famous sculpture “shipwrecked” by Robert Stigell. It is part of the park that surrounds the observatory on the hill.
Image by Mahlum on Wikimedia under Creative Commons License.

Helsinki, the capital and the largest city of Finland, is a multi-faceted place unique in many ways with much to offer to any visitor. While the greater Helsinki comprises peninsulas and large bays, the city center is very symmetrical with well-organized streets and straight boulevards. On this orientation walk you can visit some of Helsinki's not-to-be-missed attractions.