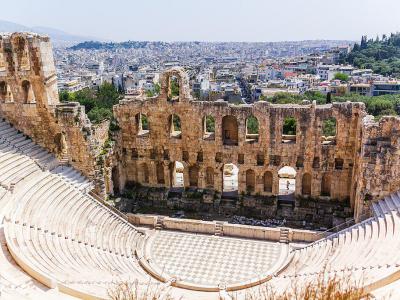 This stone amphitheater is one of the largest surviving classical Greek theaters in Athens. From ancient times to the present days it has been the venue of musical and theater performances of well known Greek and international performers.

The Odeon, also called the Herodeon, was built by the rich Greek aristocrat and Roman senator, Herodes Atticus. It was dedicated as a memorial to his wife in 161 AD. The structure has a stone wall that supports two levels of seats. In classical times, both popular and serious plays were performed at the venue. Today, the marble seating in the gallery has been restored and cushions cover the marble seats for the comfort of spectators.

After extensive renovations in 1950, the Odeon has returned to its former glory and is the venue of the summer Athens Festival that features music performances and opera. Acclaimed performers like Maria Callas, Luciano Pavarotti, and Sting have given memorable shows at the venue. International acts continue to appear there, so it's worth checking the schedule in advance. Watching a concert here on a beautiful night with the moon above you may be the greatest experience you could have. Otherwise, you can just see it as part of a tour of the city.

Why You Should Visit:
To admire the majesty of ancient Greek architecture at its peak! Watching a concert here on a beautiful summer night with the moon above you may be the greatest experience you could have. Otherwise, you can just see it as part of a tour of the city.

Tip:
International acts are frequent, so it's worth checking the schedule in advance of travel to Athens.
Of course, getting tickets ahead of time is reliant on good weather for a show in this open-air theater.