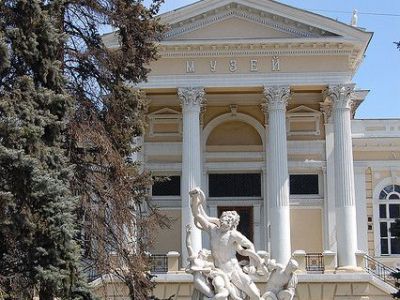 The Odessa Archaeological Museum, located on Lanzheronovskaya Street, is one of the oldest archaeological museums in Ukraine and the post-Soviet countries which was founded in 1825. Since 1997 Odessa archeological museum functions not only as a museum but also as institute of scientific research. The major directions of scientific research of Odessa museum are: archeology of primitive society in Northern Black Sea region, archeology of the Middle Ages. The museum conducts expositions, restorations and publishing activities.

The museums possesses more than 160000 exhibits: archeological finds of The Black Sea Northern region, the largest in Ukraine collection of Ancient Egypt (sarcophagi, stone slabs with hieroglyphics and fragments of papyrus, funeral inventory); Ancient Greece and Ancient Rome exhibits. The museum is also famous by its collection of coins and medals. There are over 50000 coins in the museum treasury: Ancient Greece, Ancient Rome, Byzantine Empire, Ancient Kievan Rus, coins of Russian Empire Romanovs' dynasty.

Operation hours: Tuesday - Sunday: 10 am - 5 pm.
Image by ILESH on Flickr under Creative Commons License.
Sight description based on wikipedia