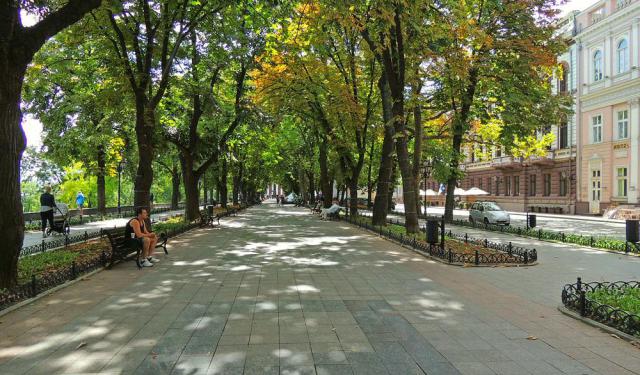 Image by Romankravchuk on Wikimedia under Creative Commons License.

Primorsky Boulevard is one of the most prominent streets in Odessa, starting at Dumskaya Square and ending at Vorontsov’s Palace. This popular tourist attraction and wonderful sight is home to several monuments, and is a valuable landmark from an architectural, archaeological and historical points of view. This walking tour will guide you through amazing sights of Odessa.
How it works: Download the app "GPSmyCity: Walks in 1K+ Cities" from iTunes App Store or Google Play to your mobile phone or tablet. The app turns your mobile device into a personal tour guide and its built-in GPS navigation functions guide you from one tour stop to next. The app works offline, so no data plan is needed when traveling abroad.

Beside Odessa City Hall you will find an interesting and funny monument. It is an iron pole with numerous sides, that has city names in Odessa and directions. So if you are lost, you can easily find your city and your way home!
Image by cubamemucho on Flickr under Creative Commons License.
2

Odessa City Hall, located on the cross of Primorskiy Boulevard, Chaikovskogo Lane and Pushkinskaya Street, occupies the Neoclassical building on Seaside Boulevard, built to a design by Francesco Boffo and Gregorio Toricelli in 1828-34. In front of the hall is a monument of Alexander Pushkin who spent 13 months in Odessa. Every half-hour, the clock above the entrance chimes the melody "Odessa my town" (the same tune greeting incoming trains at the Odessa Train Station). This is from the operetta "White Acacia" by the Soviet composer Isaac Dunayevsky. In the building of modern Odessa City Hall was Stock exchnage in the past. In front of Odessa City Hall building is a small square, called “Dumaskaya” with a monument to Pushkin, canon extracted from French Fregate "Tiger" sank in battle with Russian troops during the Crimean War.
Image by La luna negra on Wikimedia under Creative Commons License.
Sight description based on wikipedia
3

In front of the beautiful Neoclassical Odessa City Hall, you will see a huge cannon. This monument is dedicated to the successful attack on the English-French squadron off the shore of Odessa during the Crimean (Eastern) War of 1854-1855. The monument was unveiled in 1904.
Image by Constantine Kulikovsky on Wikimedia under Creative Commons License.
4

There is another amazing monument on Primorskiy Bоulevard, and it is dedicated to A.S. Pushkin, one of the most famous Russian poets. He spent 13 months in Odessa and wrote many wonderful poems there. The monument was built by subscription of the people of Odessa.
Image by Russianname on Wikimedia under Creative Commons License.
5

Wonderful and prominent Primorskiy Bоulevard will lead you to another amazing attraction--an outdoor museum in the form of a glass pyramid. Enclosed within are the remnants of an ancient Greek settlement of the VI-V centuries BC, situated on the present territory of the boulevard.
Image by aauumm on Wikimedia under Creative Commons License.
6

The Potemkin Stairs, or Primorsky Stairs, are considered a formal entrance into the city from the direction of the sea and are the best known symbol of Odessa. The staircase is 27 meters high, and extends for 142 meters, but it gives the illusion of greater length. The stairs were designed to create an optical illusion. A person looking down the stairs sees only the landings, and the steps are invisible, but a person looking up sees only steps, and the landings are invisible. A secondary illusion creates false perspective since the stairs are wider at the bottom than at the top. Looking up the stairs makes them seem longer than they are and looking down the stairs makes them seem not so long.

The original 200 stairs were designed in 1825 by Francesco Boffo, St. Petersburg architects Avraam I. Melnikov and Pot'e. The staircase cost 800,000 rubles to build. In 1837, the decision was made to build a "monstrous staircase", which was constructed between 1837 and 1841. An English engineer named John Upton constructed the stairs. After the Soviet revolution, in 1955 the Primorsky Stairs were renamed Potemkin Stairs to honor the 50th anniversary of the Battleship Potemkin uprising. After Ukrainian independence, the Potemkin Stairs, like many streets in Odessa, were given back their original name, the Primorsky Stairs. Most Odessites still know and refer to the stairs by their Soviet name.

Image by Dezidor on Wikimedia under Creative Commons License.
Sight description based on wikipedia
7

The Monument of Duc de Richelieu is situated at the top of Potemkin Stairs. It represents a bronze statue of Armand Emmanuel Sophie Septemanie de Vignerot du Plessis, 5th duc de Richelieu, a famous French statesman and governor of Odessa from 1803 to 1814.
Image by Ismael Solaz on Wikimedia under Creative Commons License.
8

The Glushko Monument is situated at the end of beautiful Primorskiy Bоulevard and is dedicated to Valentin Petrovich Glushko, a prominent Soviet engineer, scientist and one of the pioneers of rocket and space technology. He was also one of the three major Soviet "Chief Designers" of spacecraft and rockets.
Image by Urum on Wikimedia under Creative Commons License.