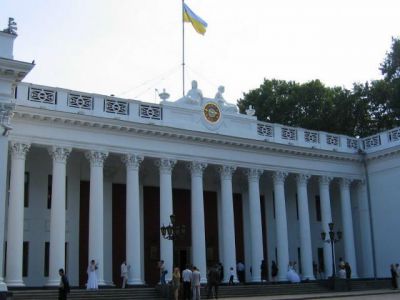 Odessa City Hall, located on the cross of Primorskiy Boulevard, Chaikovskogo Lane and Pushkinskaya Street, occupies the Neoclassical building on Seaside Boulevard, built to a design by Francesco Boffo and Gregorio Toricelli in 1828-34. In front of the hall is a monument of Alexander Pushkin who spent 13 months in Odessa. Every half-hour, the clock above the entrance chimes the melody "Odessa my town" (the same tune greeting incoming trains at the Odessa Train Station). This is from the operetta "White Acacia" by the Soviet composer Isaac Dunayevsky. In the building of modern Odessa City Hall was Stock exchnage in the past. In front of Odessa City Hall building is a small square, called “Dumaskaya” with a monument to Pushkin, canon extracted from French Fregate "Tiger" sank in battle with Russian troops during the Crimean War.
Image by La luna negra on Wikimedia under Creative Commons License.
Sight description based on wikipedia