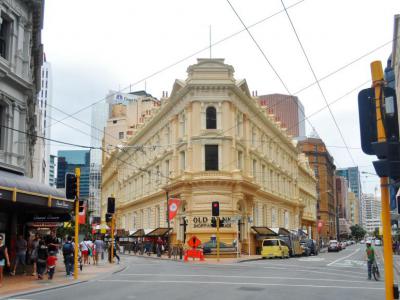 Old Bank Shopping Arcade is located in a building that was previously occupied by the Bank of New Zealand.

The property consists of four buildings built between 1883 and 1904. The most prominent is the Bank of New Zealand building (no. 1) on the wedge-shaped corner of Lambton Quay and Customhouse Quay. It was designed by Thomas Turnbull for the Bank of New Zealand and is located on the site of Plimmer's Ark. Built by T Carmichael, it is a brickwork shell with timber flooring, pressed metal ceilings and plaster decoration. The Bank of New Zealand operated a branch on the ground floor of this building from its opening in 1901 until 1984.

The banking hall was described by the New Zealand Mail of 1901 as "a handsome, lofty room, said to be one of the largest of its kind in the colonies". This building is classified as a "Category I" ("places of 'special or outstanding historical or cultural heritage significance or value'") historic place by the New Zealand Historic Places Trust.

Opened in 1999, the shopping arcade has exclusive boutiques, many of them owned by local New Zealand designers. You will also see an animated clock that tells the historical story of Plimmer's Ark. There are cafes and restaurants too.
Image Courtesy of Wikimedia and Pear285.
Sight description based on Wikipedia.