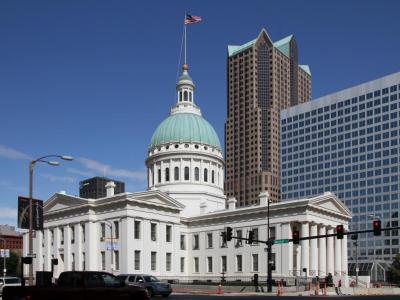 The Old St. Louis County Courthouse was built as a combined federal and state courthouse in St. Louis. Missouri's tallest habitable building from 1864 to 1894, it is now part of the Jefferson National Expansion Memorial and operated by the National Park Service for historical exhibits and events.

Land for the courthouse was donated in 1816 by Judge John Baptiste Charles Lucas and St. Louis founder René Auguste Chouteau. The Federal style courthouse was completed in 1828. It was designed by the firm of Lavielle and Morton, which also designed the early buildings at Jefferson Barracks, as well as the Old Cathedral. In 1839, ground was broken on a courthouse, designed by Henry Singleton, with four wings, including an east wing that comprised the original courthouse and a three-story cupola dome at the center. In 1851, Robert S. Mitchell began a redesign, in which the original courthouse portion on the east wing was torn down and replaced by a new east wing. In 1861, William Rumbold replaced a cupola with an Italian Renaissance cast-iron dome modeled on St. Peter's Basilica in Vatican City.

The courthouse was the tallest building in Missouri and St. Louis until 1896 when Union Station was built. When St. Louis county and the city split in 1877, the courthouse became city property. It formally became part of the new monument area in 1940. Replaced in 1941, the roof was renovated in 1955, 1985, and 2010. The courthouse remained the largest structure in the monument until the Gateway Arch was built in 1965.

Why You Should Visit:
The beautiful paintings, carvings, decorations, and spiral staircases make this building worth your time. Arch tickets are sold here, too.

Tip:
Make sure to climb the stairs to the very top, and to visit the courtroom where the first Dred Scott decision was rendered.