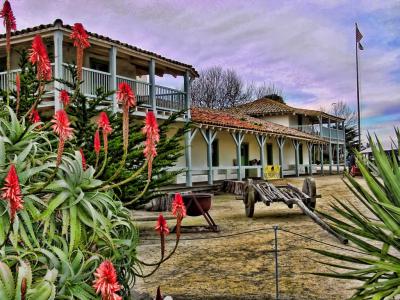 The Old Customhouse is a Spanish Colonial style adobe structure built around 1827 by the Mexican government in the Pueblo de Monterey, Alta California, in present-day Monterey County. The former custom house (Aduana in Spanish) is the state's first designated California Historical Landmark, marking the site where U.S. Commodore John Drake Sloat raised the American flag and declared California part of the United States in 1846.

The Monterey Customhouse was a landmark that the Native Sons of the Golden West determined should not disappear if within their power to prevent it. The property belonged to the United States Government, but the Native Sons obtained a lease of the buildings and grounds and restored them in the early 1900s. The lease was ultimately transferred to a State Commission appointed under a legislative act passed in 1901, which act also carried an appropriation for further restoration of the building.