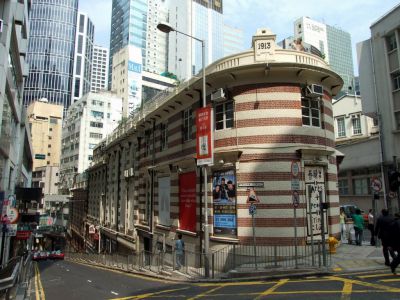 The Old Dairy Farm Depot is a Nineteenth Century building that currently houses the Foreign Correspondents' Club (in the North Block) and the Hong Kong Fringe Club (in the South Block). It is located at number 2 Lower Albert Road in the Central district of Hong Kong. The edge of the building faces Glenealy while its back faces Wyndham Street.

In 1890, a low-rise, brick and stucco structure was constructed on Lower Albert Road by Dairy Farm in Central Hong Kong. This building was used as a cold storage warehouse, initially. Later in 1913, this warehouse was expanded and renovated in order to include a dairy shop, a cold storage room and a room for meat smoking. The cold storage room was used to store winter clothing. A residency for the General Manager of the company was also added later.

During the 1970s, the company moved and the building was abandoned. The Hong Kong Fringe Club acquired the abandoned building in 1984. The Fringe club renovated the building extensively to make it a vibrant place for the contemporary arts. The Old Dairy Farm building has won the Hong Kong Government Heritage Award and it has been categorized as a Grade II Historic Building in Hong Kong.
Image by Chong Fat on Wikimedia under Creative Commons License.