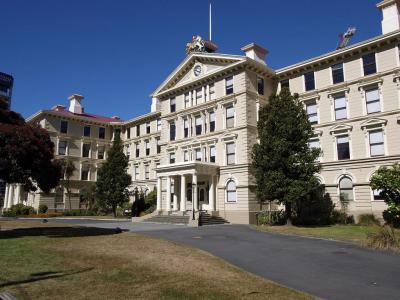 It was built to house New Zealand's public service, and now houses the Victoria University of Wellington's Law School. The building, is classified as a "Category I" historic place, that is places of special or outstanding historic or cultural heritage significance or value.

The building was commissioned in the early 1870s by the Fox Ministry, partially in anticipation of the abolition of the provincial governments. It was originally planned to have the building constructed in concrete and timber, but the cost of concrete at the time led to a decision to build in timber alone. The Italianate, Neo-Renaissance style was usually the domain of stone buildings, thus the building is designed to mimic stone.

As an important symbol of nationhood, the building was constructed to resemble an Italian stone palace to help convey its strength and stability in the expanding empire. The timber is native kauri, which could not be replicated because New Zealand's remaining public kauri forests are permanently protected. If the building had been constructed out of stone as planned, it may not have survived subsequent earthquakes, as it is situated near a major fault line. The architect was William Clayton.

The building has 143 rooms, 64 toilets, 126 fireplaces and 22 chimneys. When it opened in 1876, after 22 months of construction, and at a cost of £39 000, it was easily the largest building in the country and is now considered to be one of New Zealand's most important historic buildings.

The government buildings were formally reopened in January 1996 after the Law Faculty of Victoria University signed a 50-year tenancy that year and became its new occupants. Its restoration is considered a landmark government-initiated heritage conservation project. The grounds are open to the public, and contain examples of rare native New Zealand flora.[5] The public may view the displays on the ground floor and the Cabinet room on the first floor, but the rest of the building is leased to the Victoria University School of Law.
Image Courtesy of Wikimedia and Ulrich Lange, Bochum, Germany.
Sight description based on Wikipedia.