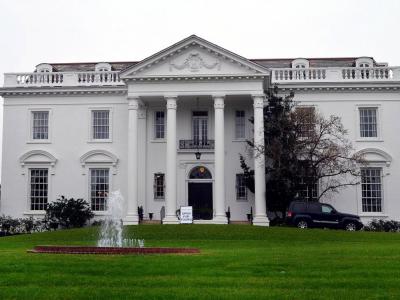 This governor's mansion is modeled after the White House in Washington D.C. supposedly because Governor Long wanted to become familiar with Washington's White House. During the construction of this new governor's mansion Huey Long refused to move into the original one. Instead after his inauguration Long stayed at the Heidelberg Hotel in Baton Rouge while his family stayed back home in Shreveport.

In 1964 the old Mansion became the home of the Louisiana Arts and Science Center Museum. The Mansion served as headquarters for the LASC until 1976, when the Museum moved to new quarters in the Old Illinois Central Train Station. In 1978, the Mansion reopened as a historic house museum.
Image Courtesy of Flickr and Ken Lund.
Sight description based on Wikipedia.

Want to visit this sight? Check out these Self-Guided Walking Tours in Baton Rouge. Alternatively, you can download the mobile app "GPSmyCity: Walks in 1K+ Cities" from iTunes App Store or Google Play. The app turns your mobile device to a personal tour guide and it works offline, so no data plan is needed when traveling abroad.

Create Your Own Walk in Baton Rouge

Creating your own self-guided walk in Baton Rouge is easy and fun. Choose the city attractions that you want to see and a walk route map will be created just for you. You can even set your hotel as the start point of the walk.

Baton Rouge is a beautiful and attractive city where there are many attractions to visit. It has numerous museums and galleries with different pieces of art, entire collections of modern or old art objects, artifacts, diverse documents of great historical and cultural importance, maps, paintings, jewelry and pieces of furniture. All these attractions must be admired by visitors of this city.

Baton Rouge is a city with a rather unique architecture, vividly displaying traces of two major influences, Spanish and French. Alongside the notable buildings waiting to be explored in downtown Baton Rouge there are quite a few other attractions not to be missed, too. To find out exactly which, follow this orientation walk and make the most of your time in the city.