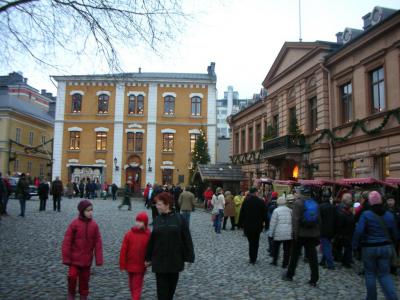 The Old Great Square is a medieval market square in Turku city center. It served as the administrative and commercial center from the 13th century until the Great Fire of Turku in 1827.

The square is surrounded by several historic buildings in the Neoclassic architectural style preserved by the city. They are mostly used for cultural events.

Old Great Square houses the Old Town Hall, designed and built by architect Samuel Berner in 1736. The Old Town Hall was destroyed in the fire of 1827. On the ramparts of the old building was built a private house. It was remodeled into a factory and later used as a police department. Today it hosts events and concerts along with an art gallery.

Brikkala Mansion, another building in the Old Great Square, is a former hotel that now functions as an art gallery with banquet halls and a courtyard coffee house. There is also Hjelt Mansion, built for sea captain Hjelt, and the only surviving stone Petersburg Empire architectural-style building in Finland. The Hjelt Mansion has served as a private home, police department, library, and cultural center.

Juselius Mansion is the youngest of the Old Great Square buildings. It is a New Renaissance-style mansion built by Carl Fredrik Juselius in 1892 as a residential building. Over the years, the Juselius Mansion has had many different occupants. The Mayor of Turku has lived there, and doctors have kept their practices in the building. Among the others, a restaurant opened in the Juselius Mansion’s cellar in 1924, which became a popular meeting place for artists, students, and academics. The legendary restaurant was closed in 1963 and reopened after 30 years in 1993.
Image Courtesy of Wikimedia and Kalajoki.