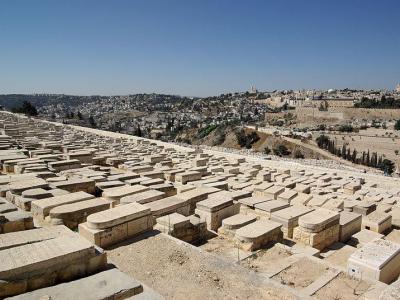 A large cemetery occupies the western and southern slopes of the Mount of Olives – the oldest continually used Jewish cemetery in the world. Since ancient times people of Jewish religion wished to be buried in this very place in the Holy Land since, according to the Bible, it is precisely where the resurrection of the dead will begin once the Messiah returns to Earth. Many characters from the past, some of whom are also mentioned in psalms and verses of ancient sacred texts, rest here.

Among the oldest tombs in the cemetery, at the foot of the Mount in the Kidron Valley, are those of Absalom, the son of David, and of Zechariah, the priest of the First Temple, while another tomb has an inscription bearing the name of a family that lived 2,000 years ago. Burials have continued and were only interrupted during the period between the Arab-Israeli war and the Six-Day War (1948-67). Traditionally, instead of using flowers, a stone is placed on the cenotaph or gravestone to denote a visit, as stones never wither and will always be there to show that the dead are not forgotten.

From the summit of the Mount of Olives, visitors can enjoy the most evocative panorama of the Holy City, with the Dome of the Rock right their view – an absolute must for first-timers!
Image by Berthold Werner on Wikimedia under Creative Commons License.