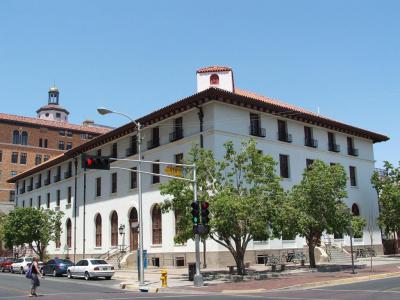 The Old Post Office is the oldest surviving federal building located at the northwest corner of Fourth and Gold in downtown Albuquerque. The Spanish Colonial Revival-style building was built in 1908 under the supervision of architect James Knox Taylor. Several federal agencies were initially housed in the Post Office building but it quickly became overcrowded, necessitating the construction of the Federal Building and U.S. Courthouse next door in 1930. The post office remained in the older building until 1972.

Today the interior of the Old Post Office has been remodeled to house the Amy Biehl Charter High School. The Old Post Office was added to the National Register of Historic Places in 1980. The exterior of the original 1908 building and the 1932 addition are exposed to public view on the east, south, and west elevations. Both period exteriors consist of a limestone base, stucco finish painted brown up to the eaves, an exposed soffit with massive decorative rafter ends and a red clay tile roof. The 1908 windows and iron balconies are duplicated in the 1932 addition.
Image by PerryPlanet on Wikimedia under Creative Commons License.
Sight description based on wikipedia