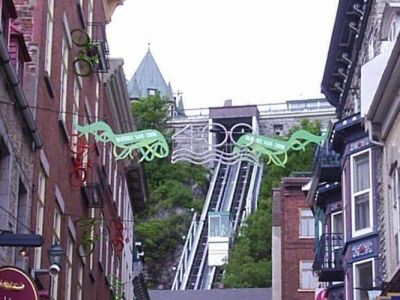 The Old Quebec Funicular (French: Funiculaire du Vieux-Québec) is a funicular railway that links the Haute-Ville (Upper Town) at Dufferin Terrace to the Basse-Ville (Lower Town) at Rue du Petit-Champlain.

A quick, convenient and scenic way to get to and from Old Québec, the "Funiculaire" is also a little piece of history, first opened in 1879. That's right, eighteen seventy-nine! Prior to being converted to electricity in 1907, it was a hydraulic system (water being transferred from one reservoir to another to make it function).

On July 2, 1945, a major fire destroyed the structure, necessitating a rebuild, that was completed in 1946. Since then, major renovations have taken place, in 1978 and 1998. Resulting from these modifications, the two cabins are now fully autonomous, working automatically like an elevator. Technically speaking, these are inclined lifts, rather than an actual funicular. In 2004, the facility celebrated 125 years of operating.

As small and limited as it may seem, the funicular is an amazing way to "see things". If going uphill, you'll enter at the Louis Jolliet House and, after getting a ticket (which takes about 10 minutes on a summer afternoon), you'll click and clack the 64 meters (210 feet) up on a 45-degree angle... to arrive at a beautiful view of the lower city, the St Lawrence River, and the city's most iconic building, Château Frontenac. This is one-of-a-kind experience that you won't get in many other places on this planet.

While all too brief, Québec's little piece of history puts the "fun" in Funiculaire! It also features a gift shop and a café.
Image Courtesy of Wikimedia and Kadellar.
Sight description based on Wikipedia.