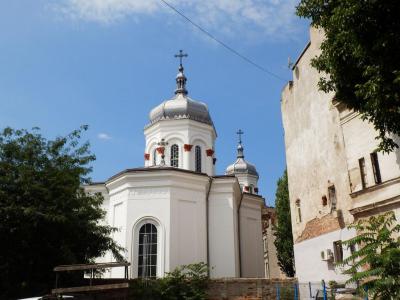 Being, firstly, a parish church, then a monastery - for a short time, and eventually, even a metropolitan office, this holy place of worship has played a great cultural and administrative role in the life of the City of Bucur.

The church was almost destroyed by the fire of 1718, but was rebuilt by the leader of the fur guild, Iamandi Dragul. Shaken by earthquakes of 1802 and 1838, the Old Saint George Church was completely ruined by the Great Fire of March 23, 1847 and was again restored by the group of parishioners led by the reeve Marinciu Petrovici.

The church we see today is the result of the reconstruction carried out by engineer Dumitru Poenaru, builder Fritz Schiller, and wood sculptor Petre Babic. The works were completed in 1881 with the finishing painting done by professor Gheorghe Pompilian. The iconostasis is carved in wood and belongs to the same Ukrainian Baroque style as the entire church building.

The Old Saint George Church has a large narthex typical of the XIX century. The small vestibule with three entrance doors is bounded by the two towers of the west façade. The narthex is vaulted, slightly flattened, with two very deep apses and topped with a steeple. The exterior of the church is simple and consists of pilasters with neo-Corinthian capitals. A neoclassical gable is placed above the porch.
Image Courtesy of Wikimedia and Stefan Jurca.