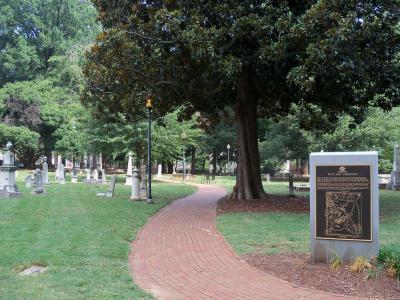 The Old Settlers' Cemetery is one of the oldest sites in Charlotte. Located in the Fourth Ward Historic District, the history of the cemetery dates to 1776 when the first grave, that of Joel Baldwin, was placed. Old Settlers' remained the only public cemetery in Charlotte through 1854, though it stayed in use through 1878 when the final citizen was laid to rest.

Among those famed North Carolina buried at Old Settlers' Cemetery is Thomas Polk, founding father of Charlotte and Continental Army Officer during the American Revolutionary War. Others interred at the cemetery include early congressmen Nathaniel Alexander, Greene Washington Caldwell and William Davidson.

Those wishing to visit Old Settlers' Cemetery will find it located adjacent to the First Presbyterian Church of Charlotte, one block north of Independence Square at Trade and Tryon Streets. Though the cemetery is within close proximity to the Presbyterian Church, the two are not connected.
Image by AlexiusHoratius on Flickr under Creative Commons License.