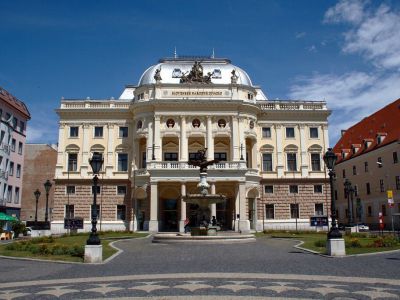 The Slovak National Theater of drama, opera and ballet is the oldest professional theater in Slovakia. Its history begins shortly after the establishment of the first Czechoslovak Republic in 1918, while the Neo-Renaissance building in Hviezdoslav Square, showing elements of the Austro-Hungarian influence, is a bit older and dates back to the 1880s.

It was designed by the Viennese architects Fellner & Helmer, and opened on 22 September 1886, with the opera Bánk bán by Ferenc Erkel. As a sign of importance, the then-Hungarian prime minister and entire cabinet attended the ceremony. The gala performance was conducted by Ferenc Erkel himself.

Another Austrian sculptor, Viktor Oskar Tilgner, is responsible for creating outside the Ganymede fountain, in 1888. The original building had a seating capacity of 1,000 spectators and was illuminated with 800 gas lamps, plus a 64-light chandelier in the auditorium.

In 1969-1972, the Theater underwent renovation, receiving a modern technical facility behind the old structure.

Performances take place here on most days of the year, so if you're a passionate theater goer, feel free to check the program in advance, so as not to miss anything worthy.
Image Courtesy of Wikimedia and John Menard.