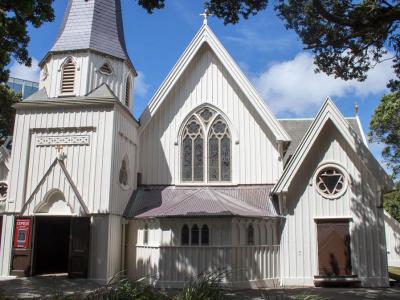 Old St. Paul's is an Anglican church. The church was completed in 1866 in the Gothic Revival architectural style. The architect was Reverend Frederick Thatcher, the vicar of St. Paul's in Thorndon.

A south transept, designed by Christian Julius Toxward, was added in 1868 to protect the church from high winds. He also designed a north transept and an extension of the north aisle in 1874 and a choir vestry in 1882.

The Diocese moved to the new St. Paul's Cathedral in 1964. The New Zealand Government purchased Old St. Paul's in 1967 and restored it in order to avoid demolition.

The church now displays flags in the nave that represent the Royal Navy, the New Zealand Merchant Navy and the United States Marine Corps. The interior of Old St. Paul's has memorial plaques, specifically for those who died in World War I.

The church is now a historical site and an event venue managed by Heritage New Zealand Pouhere Taonga.

Opening Hours:
Daily: 11am-3pm (except on some public holidays and for special events)
Image Courtesy of Wikimedia and Szilas.