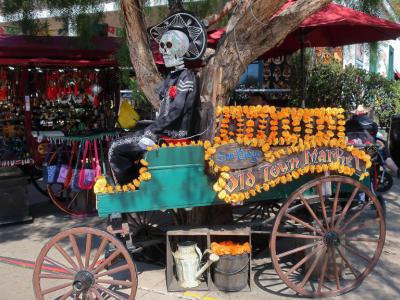 Old Town Market is a mix of over 40 unique shops with live entertainment, plus a number of distinguished historic landmarks. Among them is Casa De Aguirre, one of the first houses in Old Town San Diego, built in 1853 by Don Jose Antonio Aguirre, a wealthy merchant and successful rancher. After his death, the Aguirre family donated the property to the Catholic Church, which had then used it first as a rectory and then as Saint Anthony’s Industrial School for Indians. After years of disrepair, the original structure was torn down in 1914. In 2002, Historic Tours of America reconstructed the building as it's seen today.

In 1994, amid preparations for the reconstruction, the need to find the building's original foundations prompted an archaeological dig during which they had unearthed thousands of artifacts which had literally opened the door to the past, revealing the story of the people who had lived, worked and played here many years before. The items recovered on the site formed basis for a museum recounting the history of San Diego and southern California from 1840 to 1870.

Another historic property, The Convent building, was originally built as the Saint Joseph’s rectory at the corner of Fourth Avenue and Beech Street in downtown, and was moved to Old Town in 1940. Once at Old Town Market, it served a seminary, convent, community center, and, during World War II, hosted a United Services Organization. The building was restored in 2003 and is currently registered as San Diego Historical Site.

With several eateries and shops for souvenirs, jewelry and apparel available, this unique market is not to be missed. It does tend to get very busy during holidays such as Day of the Dead. Within a short walking distance, you'll be able to enjoy live Mariachi bands, watch local artisan demonstrations, and catch the smell of good food wafting through the air.

Why You Should Visit:
Perfect place to enjoy Mexican cuisine, with also plenty of gifts/handicrafts to buy for the whole family.