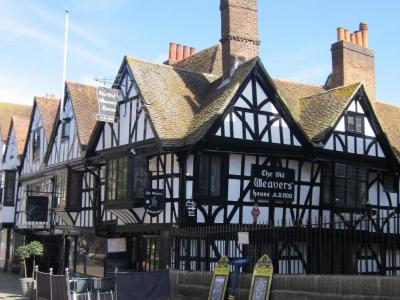 Dating from at least the 14th century and reconstructed in the 16th, this must be one of the most photographed historic buildings in Canterbury and one of the top riverside pubs in Kent. Having survived the WWII German bombing campaigns, its timber-framed front can be easily spotted on St. Peter's street, with an even longer front running along the River Stour.

The Old Weavers House takes its name from the hundreds of Huguenots and Walloons who settled in the area after fleeing religious persecution in the 16th/17th centuries in France and the Low Countries. Many had expertise as weavers, and therefore started their trade, requiring well-lit work rooms, in local buildings. Despite having no other true weavers houses that can be seen elsewhere in Canterbury, this building housed a weaving school into the early 1900s.

At the rear is a medieval "ducking stool" that historically served to punish not only scolds (women accused by their husbands of talking back too much!), but also suspected witches, by dunking them into the water. Rather than simply being fixed by the water, however, the stool could be mounted on wheels to allow the convict to be paraded through the streets before punishment was carried out.

For the ultimate riverside experience, the Old Weavers Restaurant has a riverside terrace bursting with plants and flowers to create a restful oasis at the water's edge. Not only that, but diners can also enjoy a 40-minute river tour in one of the punting company owned boats, prior to or followed by a one-course-meal of their choosing.