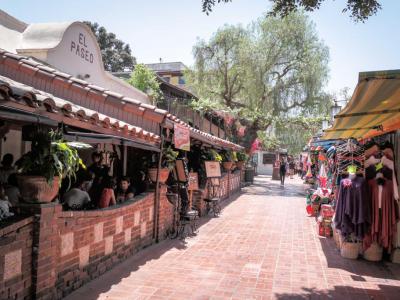 Olvera Street (Calle Olvera or Placita Olvera) is a historic district in downtown Los Angeles, and a part of El Pueblo de Los Angeles Historic Monument. Los Angeles was officially founded in 1781, Olvera Street obtained its current name in 1877. Many of the Plaza District's Historic Buildings are on Olvera Street, as well as some of the oldest Los Angeles monuments including the Avila Adobe built in 1818, Pelanconi House built in 1857, and the Sepulveda House built in 1887. The tree-shaded, pedestrian mall marketplace with craft shops, restaurants and roving troubadours is a popular tourist destination. The street has been described as a "Top Five" in the "Great Streets of America" journal.

There is also a Visitors Center where tourists can appreciate the complimentary screening of a film which depicts early life in Los Angeles.

Why You Should Visit:
If you want a taste of Mexico, this is the place to be.
Could be the closest thing to real Mexico one can experience!
Image Courtesy of Wikimedia and Visitor7.