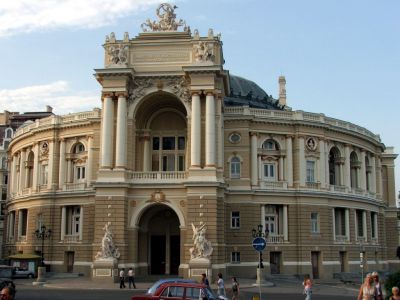 The Odessa National Academic Theater of Opera and Ballet is the oldest theater in the city. The first opera house was opened in 1810 and destroyed by fire in 1873. The modern building was constructed by Fellner and Helmer in neo-baroque style and opened in 1887. The luxurious hall follows rococo style. Its unique acoustics allows to deliver even a whisper from the stage to any part of the hall. The most recent renovation of the theater was completed in 2007.

The Saint Petersburg architect Thomas de Thomon designed the first opera theater, opened on February 10, 1810. This first theater is in almost exactly the same spot as today's theater. On the night of January 2, 1873, the building was gutted by fire. Two Viennese architects, Ferdinand Fellner and Hermann Helmer began to construct the larger replacement in 1883. The foundation stone was laid on September 16, 1884. On October 1, 1887 the theater was completed, costing 1,300,000 rubles to build. The building's façade is decorated in the Italian baroque style. In the niches are the busts of Mikhail Glinka, Nikolai Gogol, Alexandr Griboyedov, and Alexander Pushkin. The large hall was modeled after the style of Louis XVI, and is richly decorated with gilded stucco figures and designs. The architects provided the foyer with twenty-four exits, to avoid tragedy in the case of a fire. On the side of the theater is a lawn with fresh flowers and shrubs.
Image by Jewgienij Bal on Wikimedia under Creative Commons License.
Sight description based on wikipedia