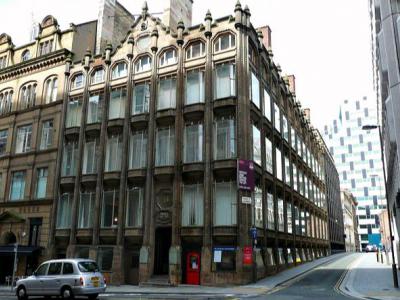 Oriel Chambers is the world's first metal framed glass curtain walled building. Designed by architect Peter Ellis and built in 1864, it comprises 43,000 sq ft (4,000 m2) set over five floors. A Grade 1 Listed Building, it is located near to the town hall. Oriel Chambers, and the architect's only other known building at 16 Cook Street, are amongst the city's precursors of modernist architecture. However, its simplified forms and large windows meant that the building initially courted controversy, being described as "an agglomeration of great glass bubbles" and even "a great abortion" which led to the disheartened Ellis abandoning architecture.

Today it looks a little different, combining its period architecture with a 1950s extension, which was added to the building after it was bombed during World War II. The building's primary tenant is a set of barristers' chambers, which have been in occupation in various parts since 1965.
Image Courtesy of Wikimedia and alan fairweather / Oriel Chambers / CC BY-SA 2.0.
Sight description based on Wikipedia.