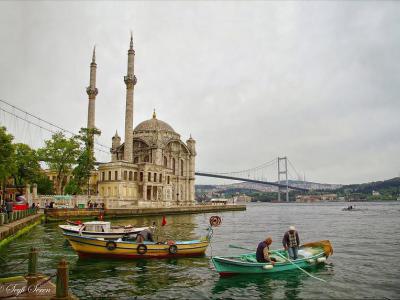 Ideally perched on the waters of the Bosphorus Strait, the "Grand Imperial Mosque" (Buyuk Mecidiye Camii) is actually rather "pint-sized" as compared to other mosques, but has been built with huge windows to illuminate its understated elegance. Now simply referred to as the Ortaköy Mosque, it was built in 1854 by Sultan Abdülmecid, who employed the talents of the same accomplished team of architects behind the Dolmabahçe Palace and many other buildings in and around Istanbul. The architecture is quite unique – a skillful blend of Ottoman and European Neo-Baroque influences, breaking away from the traditional Ottoman multi-domed style.

The landscape is breathtaking and surrounded by countless waterfront cafés, restaurants and clubs. Just in front of the mosque, a viewing platform offers views of the Bosphorus Bridge – the first to connect Asia to Europe; an enchanting place to smoke a hookah, play tavla (backgammon) and just enjoy the view and the incessant maritime traffic.

Tip:
Don't miss the collection of small boutiques scattered in the vicinity of the mosque, selling everything from siphoners to blue beads to home accessories and ladies' jewelry. Quite a few wool-combers' shops around, too!
Image Courtesy of Flickr and Seyfi Şeren.