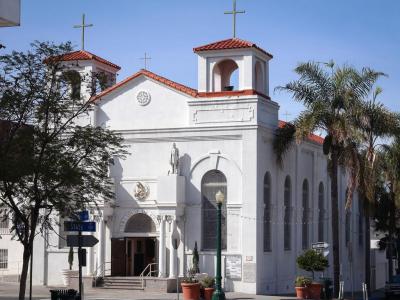 Our Lady of the Rosary Church, San Diego

The Our Lady of the Rosary Church is located in a part of San Diego, California known as “Little Italy.” It was founded in 1921, in an effort to minister to the rising Italian population in the area. Father Sylvester Rabagliati became the first priest to the fledgling congregation.

The building was started two years later, and the project was completed in time for an inauguration in 1939. The Depression of the time made to hard to finish the project during the 1920s. Mass started here though in 1926, after the church was consecrated by the Bishop of Los Angeles of the day, the Most Reverend John Cantwell.

The building is done in Spanish style architecture. One of the most interesting works of art here is a canvas done for the ceiling and walls that depicts the Rosary. The canvas of the twelve Apostles is also worth seeing, and has won acclaim for sacred art. You will also want to see the beautiful piece called the Last Judgment. There is also a stunning painting depicting the Crucifixion of Jesus. The woodwork on the insight of the sanctuary is also quite classic of the Spanish style of architecture, so you will want to go and plan at least a hour to enjoy the artwork here.
Image by Darko GLAZER on Flickr under Creative Commons License.

San Diego is famous for its buzzy nightlife. There are plenty of clubs and lounges in the city that offer a relaxing atmosphere, a chance to strike a nice conversation, enjoy great cocktails - classic signature martinis and beautifully mixed drinks with fine liquor atop, and party crazy all night long. Take this walking tour for a unique nightlife experience in San Diego.

Old Town San Diego is considered the "birthplace" of California. The Old Town Historic Park was added to the National Register of Historic Places in 1971. It features amazing old historic houses, unique specialty shops, the first San Diego newspaper office and spectacular gardens. Take this walking tour to discover some of the most beautiful sights that the Old Town of San Diego has to...  view more

Jewell of a city adorning the Pacific coast of California, San Diego is a popular destination renowned for its beaches, parks and warm climate. On this walk you will visit some of San Diego's main and less known attractions situated in the historic downtown area.

Named after the Spanish explorer Vasco Núñez de Balboa, Balboa Park is one of the largest cultural parks in USA. The park features 15 famous museums, wonderful gardens, renowned cultural venues and the San Diego Zoo. It is a must see attraction in San Diego and plays host to a constant stream of plays, musicals, museum exhibitions and live concerts. Take this walking tour to discover the amazing...  view more

It would be a pity to leave San Diego without having explored its specialty shops and bringing home something truly original. We've compiled a list of gifts and souvenirs, which are unique to San Diego, that a visitor might like to purchase to reflect their visit.

San Diego is famous for its buzzy nightlife. There are plenty of clubs and lounges in the city that offer a relaxing atmosphere, a chance to strike a nice conversation, enjoy great cocktails - classic signature martinis and beautifully mixed drinks with fine liquor atop, and party crazy all night long. Take this walking tour for a unique nightlife experience in San Diego.