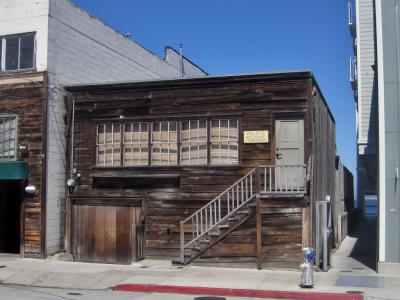 Pacific Biological Laboratories, abbreviated PBL, was a biological supply house that sold preserved animals and prepared specimen microscope slides, many of which were of maritime aquatic species, to schools, museums, and research institutions. It was located in a building on what is now Monterey's Cannery Row on Monterey Bay in Monterey County, California.

The building, activities, and business were fictionalized as "Western Biological Laboratory" by John Steinbeck in his novel Cannery Row, as was a character based on one of its founders, Ed Ricketts. After a 1936 fire Steinbeck invested in the laboratory and owned half its stock.

In 1949, a year after Ricketts's death, the Pacific Biological Laboratories building was sold to Yock Yee, a local grocer. High school literature teacher and jazz enthusiast Harlan Watkins began renting the Pacific Biological Laboratories building from Yock Yee and purchased it in 1956. In 1958, after Watkins had married and moved to Europe, friends of Watkins, including Frank Wright, Ed Haber, Joe Turner, Fred Fry and Ed Larsh, joined together to purchase the building under the name “Pacific Biological Laboratories.” The building served as a weekly meeting place for club members, many of whom were prominent Monterey artists and writers. Founding club members also included nationally known cartoonists Hank Ketcham (creator of Dennis the Menace, Eldon Dedini and Gus Arriola. Several club members helped to start the Monterey Jazz Festival. The first festival was held in 1958.

The Pacific Biological Laboratories club sold their building to the City of Monterey in December 1993 for $170,000. A seismic rehabilitation of the building was done in 1998. It was restored by the Cannery Row Foundation which was given the Governor's Award for Historic Preservation.

On May 14, 1997, the 100th anniversary of Ricketts' birth, a commemorative plaque was placed on the 165 Fountain Avenue location by the Pacific Grove Heritage Society and the Pacific Grove Museum of Natural History Association. The Pacific Biological Laboratories is on the National Register of Historic Places.

Monthly tours are offered through the City of Monterey.
Image Courtesy of Flickr and Teemu008.
Sight description based on Wikipedia.