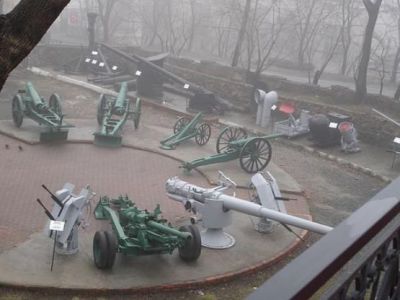 Pacific Fleet Museum was established in 1950 by Captain Sushkov. The museum’s headquarters, initially situated in an old Lutheran church, were relocated in 1997 to another prominent landmark of Vladivostok, namely a beautiful Neo-classical building that was built at the very beginning of the 20th century and first served as a navy officers’ residence. The exciting exhibitions of the museum cover a long history of the Russian pacific fleet featuring navy ships’ guns, equipment, photographs, prints and documents. The museum is open Wednesday to Sunday from 10am to 6pm, and closed on every last Friday of the month.
Image by volgogradman on Flickr under Creative Commons License.

Want to visit this sight? Check out these Self-Guided Walking Tours in Vladivostok. Alternatively, you can download the mobile app "GPSmyCity: Walks in 1K+ Cities" from iTunes App Store or Google Play. The app turns your mobile device to a personal tour guide and it works offline, so no data plan is needed when traveling abroad.